Dealing With New Sales Management in the International Arena

Before, it had always been in the abstract for me. I was always one step removed, only learning, via verbal or written reports from other professional reps, about their challenges in dealing with a principal’s new management team. In more than two decades of repping U.S. companies in foreign countries, I had never experienced an extensive purge of management of my principal’s staff. Until now. Adding to the challenge I now faced was the fact that my agency was considered part of the old regime and thus under suspicion of harboring ideas of the recently departed management. As this management turnover started to unfold, it dawned on me that taking steps to become more proactive with new management in these types of situations was the desirable path to follow.

Early on I discovered that when there’s a significant change in the principal’s management team, it isn’t until a detailed conversation takes place between the international rep and the new management of the principal that previously held practices and assumptions can be clarified, mentally processed and hopefully absorbed. When it becomes apparent that new management’s business orientation had predominantly been in the domestic U.S. marketplace (vs. overseas), the essentials of international repping and the heightened-risk­ concept of pioneering U.S. products must, from the outset of this “new” relationship, be extensively restated. The sweat put into this type of explication is necessary because most US principal management is usually vastly unprepared for the realities of international market development.

Here is a prime example. When what my hybrid, international, manufacturers representative company was doing internationally was being compared to what domestic brokers do in the United States, I attempted to correct the misperception and restate the high-risk nature of what my company does, and does not do, in the pioneering of US products to foreign companies. Then, when it was suggested to my company that an international rep who was pioneering products by forgoing upfront international market development fees should also reduce my regular commission rate in order to lower the export price and get the international order, I further realized how large of a conceptual gap there was in our mutual understanding of a pioneering rep’s massive, upfront, monetary sacrifice. 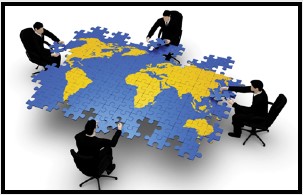 Further adding to the challenge is the rep/principal educational divide. When an attempt is made by the principal to unilaterally take a key foreign customers and convert it into a house account(s), it is a pretty sure bet that the principal has not been keeping up with his or her reading, or adherence to, a Code of Ethics. It is problematic when any principal attempts to make a professional rep feel guilty for pointing out a fundamental breach in the business relationship while in the next breath conceding he or she had not even taken the time to refer to our mutually shared, written agreement. A rep must always point out that to attempt to call the rep’s customer a house account not only flouts the contractual relationship, but it also turns on its head the directional flow of leads. Traditionally, principals provide trade leads to commission­-only reps as a kind of non­ guaranteed subsidy that the rep might use to offset the cost of pioneering the principal’s products to a wider, international audience. Even with the very lopsided nature of the LOP/LOP agreement in the principal’s favor, there is never an exemption from the thou shalt not steal maxim. Unilateral, attempted annexations by principals of the pioneering reps accounts into house accounts is the definition of egregious.

One of the more pronounced pileups of principal miscues can be seen when a principal threatens to tear up a LOP/LOP agreement contract and replace it with a one year contract that strips away the LOP/LOP obligations that the principal was legally obliged to fulfill. It is particularly in these types of situations when it was time to communicate with a principal in writing in order to bring some much needed context and refresher training to the whole principal/rep relationship. When there is a difference between the rep and the principal regarding the definition of words and an understanding of what the parties can and cannot legally do, putting it in writing is a much more effective course of action versus mutual yelling at each other into opposite ends of a telephone. In these types of situations when a rep mentions to the principal that he or she would be sending him a long­ needed letter, with the gap in mutual understanding being so broad it should not be surprising that the principal’s reaction will be that such a letter was not imperative.

When working under the framework of a pure, pioneering, LOP/LOP contract, I have personally made it a practice to never ask any small U.S. clients to share in the risk by putting money towards foreign market development. After all, a pioneering rep providing this upfront subsidy (the bank loan) to the principal remains the essence of the LOP/LOP agreement. These hybrid, sui generis, contracts have come into being for a reason:Most US SME principals cannot, or won’t, risk scarce capital in developing foreign markets where demand for the product or service is currently indeterminate, and the product’s legal allowability and possible registration is also uncertain. So the LOP/LOP allows the enterprising professional rep to take on the pioneering burden if he or she thinks that a product line is dynamic and unique enough to eventually not only punch through into international market acceptance; it must also offer the type of long-term remuneration that can make the rep forego the relative offsetting safety of upfront market development fees.

Always predicated on a company being export­-ready, the LOP/LOP concept appeals to the truly savvy U.S. principal because it provides a golden opportunity for them to get their unique products into foreign markets at an extraordinary discount while simultaneously positioning them to tap into overseas markets and their potential revenue streams. But the caveat is this: if the small principal is inexperienced in the realities of international trade, they will have a hard time absorbing the fact that when a new product category is so unique that it not only catches importers’ attention; it also gains the attention of regulatory bodies within many foreign countries. And once the product line is caught up in the gears of the foreign government’s regulatory and review machinery, the process can crawl along or even stop as the foreign importer tries to think of creative ways to legally bring in the product line through an often calcified, foreign governmental bureaucracy. Since months — and even years — can pass with some foreign governments still considering whether to spec­-in a new health product category, some inexperienced, US SME principals relatively new to international trade, and already antagonistic about the shotgun rep­-principal relationship that they inherited, can sometimes resort to pretext as a way of trying to exert some control over the rep­/principal relationship.

MANA AS A RESOURCE

To get out in front of situations like this, it is recommended that a rep acquaint, or reacquaint, himself with the latest information (e.g., articles, special reports, webinars, etc.) from MANA. The association will educate reps and principals alike to the fact that dramatic changes in the management of a principal can generate ongoing complaints, concerns and low to high grade angst among reps. Armed with this information from MANA’s database, coupled with MANA as a kind of 3rd party, educational arbiter about the very nature of the rep/principal dynamic, as a goodwill gesture a rep can share this with the principal’s new management. This should be especially helpful to not only those that have only dabbled in international trade and who have scant background in working with independent, professional rep firms; it should also be helpful to new management who are also only vaguely familiar with the concept of reps taking on the risk-rich burden of pioneering products.

However, limiting the chances that this information will be persuasive to the principal are the probably very real constraints on a small principal’s time to think through what is being presented to him. When a small principal, with a skeletal, in-house staff, thinks it’s normal for the rep to be asked to act as a “back office” on, say, regulatory and administrative issues, one can see how time­-constraints, and force of habit, enables the types of skewed justification that the principal thinks are legitimate rep tasks. To disabuse new, principal management of such preconceived notions, and to hopefully influence a more normal behavior between a principal’s new management team and the pioneering rep, a restatement of the tasks of rep vs. principal should also stress that while some consultative selling already is entailed in the work of professional, pioneering reps, there are consultative parameters that can only be mutually exceeded through a Fee For Service Addendum to the LOP/LOP.

International trade takes considerably more time than domestic business. Furthermore, because of the nature of many of the products that my company reps (e.g., consumables that go into, or interact with, the human body, clinical studies, etc.) it’s important to determine the US SME’s export readiness plus how much foreign regulatory and financial ability they have to register their products in foreign countries. Time­wise it can be similar to selling a component to a car company:a thousand eyes (the importer’s staff, governmental agencies, medical associations, medical education associations, etc.) must thoroughly vet and/or weigh in with opinions before the product is formally given the collective green light and a purchase order can be issued. It is a mistake to assume new management will be aware of these variables or will be able to grasp that how things are done in Baltimore are not how things are done in Jakarta or Moscow.

When all of the shared institutional and international knowledge gets shoved out the door and principal management comes under new direction, a rep merely deciding to fret about what may come does not even amount to half­measures. To preempt other issues from bleeding over into the larger business relationship, it is better to acknowledge that with a departure of a principal’s key manager, there is also bound to be a shallowing of the pools of shared understanding and values that formerly existed in the rep/principal relationship. Charitably speaking, in doing damage control the rep might consider the possibility that any stunts, any trust­-shattering operational habits and behavior by a principal, might very well grow from ignorance. Although it is exonerative of nothing, they might simply not know what they do not know.

THE USE, REUSE, AND RESTATEMENT OF KNOWLEDGE IN THE REP/PRINCIPAL RELATIONSHIP

Nonetheless, while MANA is the definitive source to help prevent impulsive decision making, if a principal does not avail themselves of the information via association membership, there will be an inherent and ongoing problem. If common sense is not able to fill in the knowledge gap, how will the US SME’s new management educate itself regarding the dynamics of the rep/principal relationship? Furthermore, how will the US SME’s new management come to learn of the international pace and process involved in international trade and the responsibilities and tasks that they must perform? Having on hand a ready­made tool that diagnoses a US SME’s Export Readiness and Rep Readiness upfront is vital. But since the ERRR Questionnaire (the ERRRQ) process was gone through by the recently departed management, with new principal management in charge restating and reemphasizing the core tenets of the formal, LOP/LOP contractual relationship already in place is an efficient and timely way to handle the germane information and resources that the two commercial organizations have signed onto.